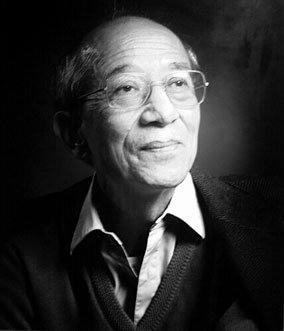 Born in Nanjing in 1922, Hsiung Ping-Ming was the son of a mathematician. On the basis of philosophical thinking and knowledge of the East and the West, he created his art ranging from sculpture to painting, calligraphy, and poetry.

Hsiung Ping-Ming graduated from the Department of Philosophy at the United Southern University in 1944. In 1947 he went to study in Paris on a government scholarship. Initially, he continued his study of philosophy, but shortly thereafter studied art at the École Nationale Supérieure des Beaux-Art and Académie de la Grande Chaumière, where he received his basic training in sculpture.

In the 1950s, Hsiung Ping-Ming and other overseas graduates like Wu Guanzhong were torn between returning to China and staying in France. After much deliberation, Hsiung Ping-Ming came to the decision to pursue his career primarily as a sculptor in Paris. His works were shown in salons and group and solo exhibitions, and received praise from critics.

Hsiung Ping-Ming often imbued his works with a lingering sense of nostalgia. His earlier sculptural works center on realist representations of human body. In the mid and late 1950s, he experimented with soldered art in the form of metallic animals. His “Water Buffalo Series” from the 1960s incorporates certain elements from the East. From the 1980s onwards, his sculptures has come to stand as articulations of linear lines.

Hsiung Ping-Ming lived in Paris for more than 50 years. In addition to his accomplishment in sculpture, in the 60s Hsiung Ping-Ming started to teach Chinese in college. He has published articles and conducted further research on Chinese calligraphy. Two of his many publications are About Rodin and The Theoretical System of Chinese Calligraphy. On the basis of philosophical thinking, Hsiung Ping-Ming created his art ranging from sculpture to painting, prints, calligraphy, and poetry. With his extensive knowledge of both the East and the West as well as his influence on art and philosophy, Hsiung Ping-Ming is an indisputably important artist of the 20th century.